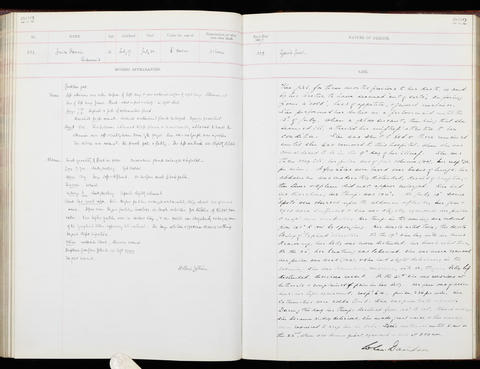 Occupation or role: Parlourmaid
Age: 26
Gender: Female
Date of admission: 17 Jul 1897
Date of death: 22 Jul 1897
Disease (transcribed): Typhoid fever
Disease (standardised): Typhoid fever (Systemic)
Admitted under the care of: Owen, Herbert Isambard
Medical examination performed by: Davidson, William Lee
Post mortem examination performed by: Latham, Arthur Carlyle
Medical notes: 'The girl, for three months previous to her death, is said, by her brother, to have seemed 'out of sorts', suffering from a 'cold' , lack of appetite, and general malaise. She performed her duties as a parlourmaid until the 13th of July, when a fellow servant, thinking that she seemed ill, attracted his misstress' attention to her condition. She was sent to bed and there remained until she was removed to this hospital, when she was considered to be in the 9th day of her illness'
Body parts examined in the post mortem: Thorax, abdomen