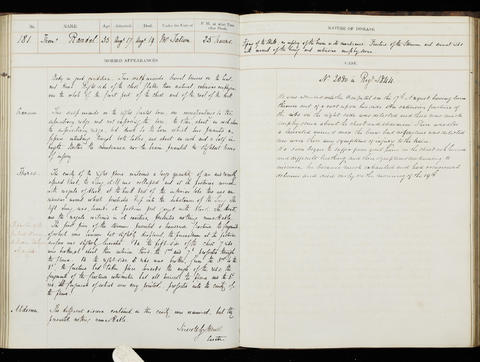 Occupation or role: [No occupation stated]
Age: 35
Gender: Male
Date of admission: 17 Aug 1844
Date of death: 19 Aug 1844
Disease (transcribed): Fissure of the skull; no injury of the brain or its membranes. Fracture of the sternum and several ribs with wound of the lung and extensive emphysema.
Disease (standardised): Fissure (Skull); Fracture (Sternum); Fracture (Ribs); Wound (Lung); Emphysema (Lung)
Admitted under the care of: Tatum, Thomas
Medical examination performed by: n/a
Post mortem examination performed by: Hewett, Prescott Gardner
Medical notes: The patient was admitted after having been thrown out of a cart upon his side.
Body parts examined in the post mortem: Cranium, thorax and abdomen
Type of incident: Trauma/accident

Preparation of the fractured sternum. See Museum catalogue I.59