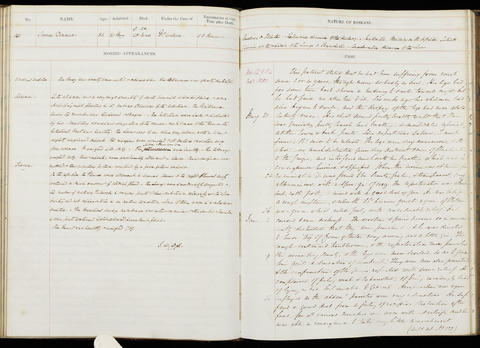 Occupation or role: [No occupation stated]
Age: 33
Gender: Male
Date of admission: 21 May 1851
Date of death: 28 Jun 1851
Disease (transcribed): Anasarca & ascites. Extensive disease of the kidney. Peritonitis. Pleurisy on the left side. Latent tubercle at the apices of the lungs & bronchitis. Considerable disease of the liver
Disease (standardised): Edema (Systemic); Ascites (Peritoneum); Disease (Kidneys); Peritonitis (Abdomen); Pleurisy (Lungs); Disease (Liver)
Admitted under the care of: Wilson, James Arthur
Medical examination performed by: Barclay, Andrew Whyte
Post mortem examination performed by: Ogle, John William
Medical notes: 'This patient stated that he had been suffering from cough some 3 or 4 years, though never so badly as now. His legs had for some time back shown a tendency to swell towards night, but he had paid no attention to it; six weeks ago his abdomen had also begun to swell, and the dropsy of the legs had never abated entirely since’
Body parts examined in the post mortem: Abdomen, thorax