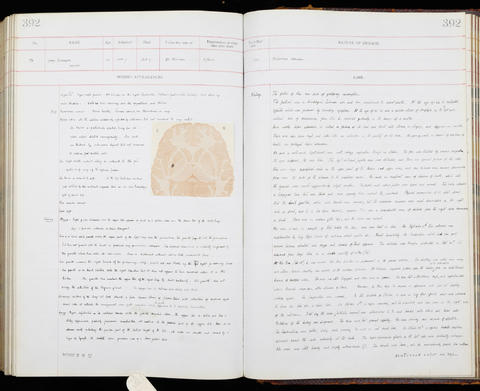 Occupation or role: Bricklayer's labourer
Age: 35
Gender: Male
Date of admission: 7 Sep 1891
Date of death: 27 Sep 1891
Disease (transcribed): Mediastinal sarcoma
Disease (standardised): Sarcoma (Mediastinum)
Admitted under the care of: Dickinson, William Howship
Medical examination performed by: n/a
Post mortem examination performed by: Dickinson, William Lee
Medical notes: 'The father of this man died of galloping consumption. The patient was a bricklayer's labourer who had been accustomed to robust health. At the age of 24 he contracted syphilis which was followed by secondary symptoms. At the age of 25 he had a sudden attack of hemiplegia on the ?left side without loss of consciousness: from this he recovered gradually in the course of 6 months. Five weeks before admission he noticed a fullness of the head and throat with blueness on stooping, and dyspnoea on exertion'
Body parts examined in the post mortem: Head, thorax, abdomen
Illustrations: Yes
Type of incident: n/a n/a