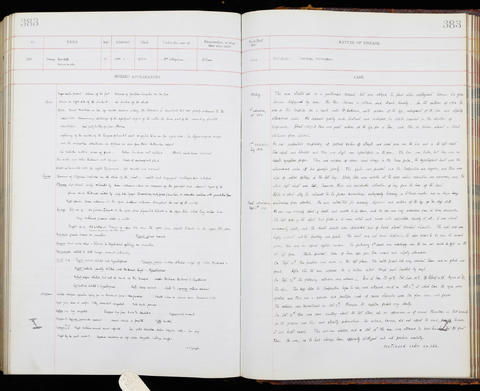 Occupation or role: Billiard marker
Age: 37
Gender: Male
Date of admission: 11 Sep 1891
Date of death: 21 Oct 1891
Disease (transcribed): Phthisis. Cerebral thrombosis
Disease (standardised): Tuberculosis (Lungs); Thrombosis (Brain)
Admitted under the care of: Whipham, Thomas Tillyer
Medical examination performed by: Rolleston, Humphry Davy
Post mortem examination performed by: Dickinson, William Lee
Medical notes: 'This man started life as a gentleman's servant but was obliged to find other employment because his face became disfigured by acne. He then became a potman and drank heavily. In the autumn of 1884 he was in this hospital for a month under Dr Dickinson [William Howship Dickinson], with oedema of the legs, enlargement of the liver and slightly albuminous urine. He improved greatly under treatment and modified his habits somewhat in the direction of temperance. About 1887-8 there was great oedema of the legs for a time, and then he became almost a total abstainer from alcohol'
Body parts examined in the post mortem: Head, thorax, abdomen