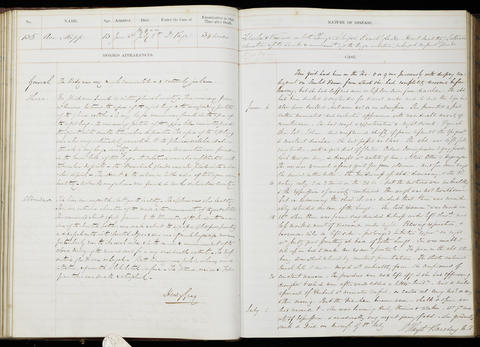 Occupation or role: [Occupation not stated]
Age: 13
Gender: Female
Date of admission: 6 Jun 1849
Date of death: 8 Jul 1849
Disease (transcribed): Tubercles & vomicae in both lungs. Enlarged bronchial glands. Heart healthy. Extensive ulceration of the small & commencement of the large intestine. Enlarged mesenteric glands
Disease (standardised): Tuberculosis (Lungs); Abscess (Lungs); Ulcer (Intestines); Enlargement (Mesenteric glands)
Admitted under the care of: Page, William Emanuel
Medical examination performed by: Barclay, Andrew Whyte
Post mortem examination performed by: Gray, Henry
Medical notes: 'This girl had been in the hospital 8 or 9 months previously with dropsy consequent on scarlet fever, from which she had completely recovered before leaving, but she had suffered more or less ever since from diarrhoea. The abdomen had been swelled & very tender for several weeks, and she said the legs had also been swelled, but were not so on admission’
Body parts examined in the post mortem: Thorax, abdomen