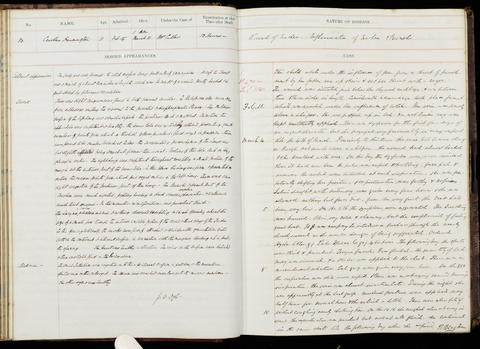 Occupation or role: [No occupation stated]
Age: 11
Gender: Female
Date of admission: 15 Feb 1851
Date of death: 11 Mar 1851
Disease (transcribed): Wound of trachea. Inflammation of trachea & bronchi
Disease (standardised): Wound (Throat); Inflammation (Throat, lungs)
Admitted under the care of: Cutler, Edward
Medical examination performed by: Blagden, Robert
Post mortem examination performed by: Ogle, John William
Medical notes: 'This child, while under the influence of fear from a threat of punishment by her father, ran up stairs & cut her throat with a razor. The wound was situated just below the thyroid cartilage & was between two & three inches in length. Considerable haemorrhage took place from it, which was arrested under the influence of cold. Her voice was scarcely above a whisper. She was propped up in bed, & a wet linen rag was kept constantly applied’
Body parts examined in the post mortem: Thorax, abdomen