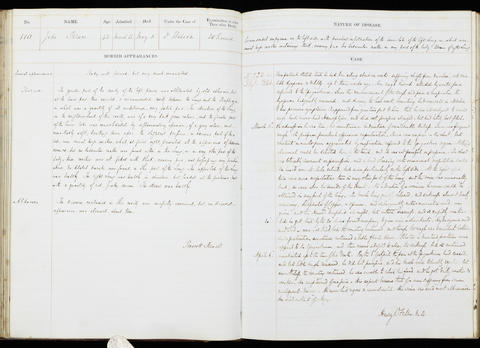 Occupation or role: [No occupation stated]
Age: 42
Gender: Male
Date of admission: 11 Mar 1846
Date of death: 5 May 1846
Disease (transcribed): Circumscribed empyema on the left side with purulent infiltration of the lower lobe of the left lung in which were several large cavities containing thick, creamy pus. No tubercular matter in any part of the body. Oedema of the right lung.
Disease (standardised): Empyema (Thorax); Suppuration (Lung); Oedema (Lung)
Admitted under the care of: Wilson, James Arthur
Medical examination performed by: Fuller, Henry William
Post mortem examination performed by: Hewett, Prescott Gardner
Medical notes: This patient stated that he had been ailing about six weeks, suffering chiefly from diarrhoea, with some little dyspnoea and debility, up to three weeks before admission when a cough ensued along with acute pain in the epigastrium.
Body parts examined in the post mortem: Thorax and abdomen
Type of incident: n/a