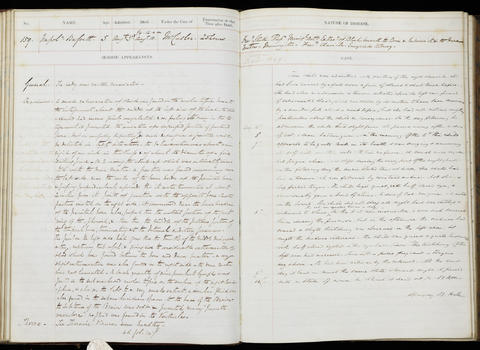 Occupation or role: [Occupation not stated]
Age: 5
Gender: Male
Date of admission: 3 Aug 1849
Date of death: 10 Aug 1849
Disease (transcribed): Fractured skull. Ruptured meningeal artery. Extravasation of blood beneath the bone & between it & the dura mater. Meningitis. Fractured clavicle. Encysted kidney
Disease (standardised): Fracture (Skull); Rupture (Brain); Extravasation (Brain); Meningitis (Brain); Fracture (Collarbone); Cyst (Kidneys)
Admitted under the care of: Cutler, Edward
Medical examination performed by: Holl, Harvey Buchanan
Post mortem examination performed by: Gray, Henry
Medical notes: 'This child was admitted with fracture of the right clavicle which had been caused by a fall down a pair of stairs a short time before. He had also on admission a tumour situated above the left ear formed of extravasated blood, which was stated by its mother to have been occasioned by a similar fall about a week before, but she had not noticed anything particular about the child in consequence’
Body parts examined in the post mortem: Cranium, thorax, abdomen, right upper extremity

Preparation of the cranium and clavicle, Museum catalogue I.4 (A.a.98)