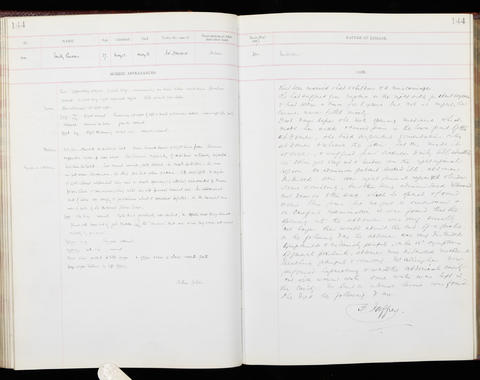 Occupation or role: [Occupation not stated]
Age: 37
Gender: Female
Date of admission: 13 May 1897
Date of death: 16 May 1897
Disease (transcribed): Peritonitis
Disease (standardised): Peritonitis (Abdomen)
Admitted under the care of: Haward, John Warrington
Medical examination performed by: Jaffrey, Francis
Post mortem examination performed by: Latham, Arthur Carlyle
Medical notes: 'Had been married and had 5 children and 2 miscarriages. She had suffered from rupture on the right side for about 10 years and had worn a truss for 8 years but not at night, her trusses never fitted nicely. Five days before she took opening medicine which made her sick and caused pain in the lower part of the abdomen, she tried turpentine fomentations on the abdomen to relieve the pain but this made it worse, and suffered from sickness daily till admitted, the skin got very red and tender over the right inguinal region'
Body parts examined in the post mortem: Thorax, abdomen