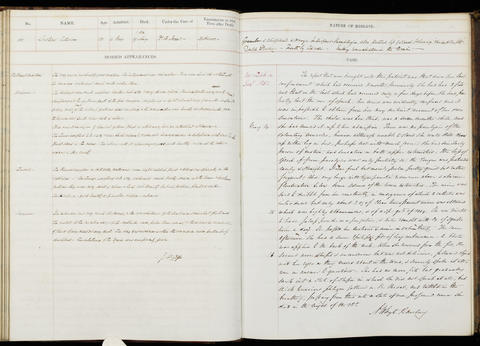 Occupation or role: [No occupation stated]
Age: 28
Gender: Female
Date of admission: 14 May 1851
Date of death: 19 May 1851
Disease (transcribed): Granular & atrophied kidneys. Imperfect paraplegia, also partial loss of speech following epileptic fits. Double pleurisy. Death by apnoea. Nothing remarkable in the brain
Disease (standardised): Disease (Kidneys); Paraplegia (Brain); Epilepsy (Brain); Pleurisy (Lungs); Apnea (Respiratory system)
Admitted under the care of: Bence Jones, Henry
Medical examination performed by: Barclay, Andrew Whyte
Post mortem examination performed by: Ogle, John William
Medical notes: 'The report that was brought with this patient was that since her last confinement which had occurred 3 months previously she had had 3 fits and that in the last which had occurred only a few days before, she had partially lost the use of speech; her mind was evidently confused and it was impossible to obtain from her any distinct account of her own sensations. The child was her third, was a seven-month child, and she had nursed it up to her admission’
Body parts examined in the post mortem: Abdomen, thorax