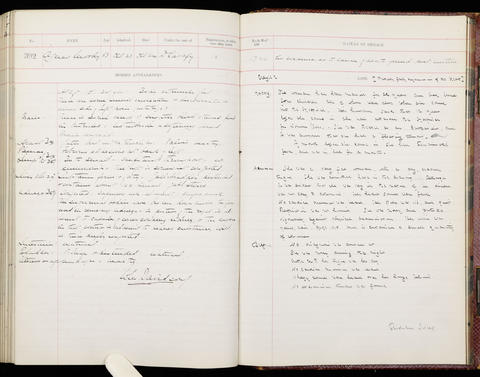 Occupation or role: [Wife of] Smith
Age: 53
Gender: Female
Date of admission: 23 Oct 1888
Date of death: 24 Oct 1888
Disease (transcribed): No evidence as to cause of death found post mortem (probably fatty degeneration of the heart)
Disease (standardised): Disease (Heart)
Admitted under the care of: Cavafy, John
Medical examination performed by: Davidson, William Marshall
Post mortem examination performed by: Sisley, Richard
Medical notes: 'The woman had been married for 22 years and had borne four children, all of whom were alive when she came into the hospital. Her husband said that 12 years before she came in she had attended the Hospital for Women. She was treated as an out-patient, and it was supposed that she had a ‘floating tumour’. A month before she came in she had rheumatic fever, and was in bed for a month’
Body parts examined in the post mortem: Body parts examined: Brain, heart, pleurae, lungs, liver, kidneys, intestines, bladder, uterus