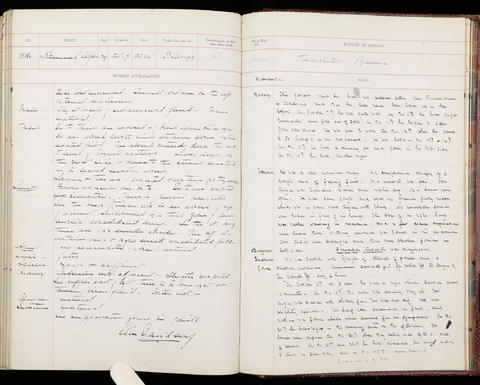 Occupation or role: Cooper
Age: 29
Gender: Male
Date of admission: 17 Oct 1888
Date of death: 26 Oct 1888
Disease (transcribed): Tonsillitis. Pyaemia
Disease (standardised): Tonsillitis (Tonsils); Sepsis (Systemic)
Admitted under the care of: Cavafy, John
Medical examination performed by: Davidson, William Marshall
Post mortem examination performed by: Sisley, Richard
Medical notes: 'The patient said he had not suffered either from rheumatism or scarlatina and that he had never been laid up in bed before. On October 7th he was quite well, on the 8th he had slight headache and felt ‘out of sorts’. On the 10th he began to suffer from sore throat. He was able to work till the 12th when he came to St George’s as an out-patient’
Body parts examined in the post mortem: Body parts examined: Brain, tonsils, lungs, heart, liver, spleen, kidneys, bladder, intestines