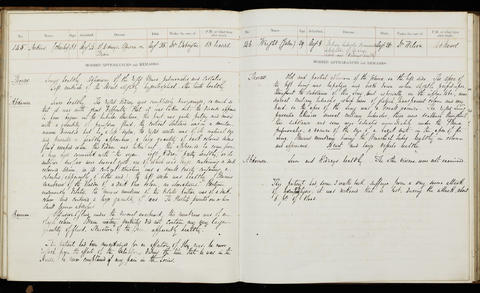 [No name], [No age stated], [No occupation stated]

Occupation or role: [No occupation stated]
Age: [No age stated]
Gender: Male
Date of admission: Aug 1841
Date of death: Aug 1841
Disease (transcribed): Compound fracture of the skull and laceration of the brain
Disease (standardised): Fracture (Skull); Laceration (Brain)
Admitted under the care of: Tatum, Thomas
Medical examination performed by: n/a
Post mortem examination performed by: n/a
Medical notes: 'This patient shortly after his admission, with a compound fracture of the skull and depression of bone, became very violent and was obliged to be confined in a straight jacket. 2 days after the accident the right upper and lower extremities were paralyzed. He lived 5 days but never recovered his senses’
Body parts examined in the post mortem: Cranium, abdomen