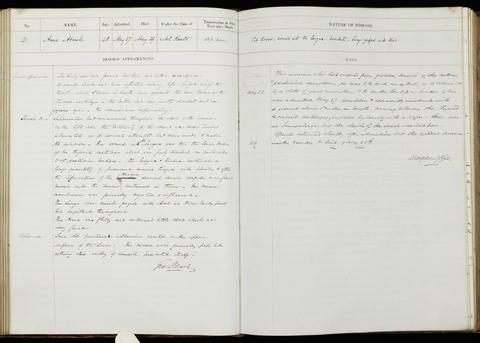 Occupation or role: [No occupation stated]
Age: 48
Gender: Female
Date of admission: 27 May 1847
Date of death: 29 May 1847
Disease (transcribed): Cut throat. Wound into the larynx. Bronchitis. Lungs gorged with blood.
Disease (standardised): Wound (Throat); Bronchitis (Lung); Gorged (Lung)
Admitted under the care of: Keate, Robert
Medical examination performed by: Gee, Adolphus John
Post mortem examination performed by: Pollock, George
Medical notes: This woman, who had suffered from from fistulous disease of the rectum and phthisical symptoms which rendered her life a burden, was admitted with a wound between the thyroid and cricoid cartilage, inflicted by herself with a razor.
Body parts examined in the post mortem: Throat and abdomen
Type of incident: Suicide