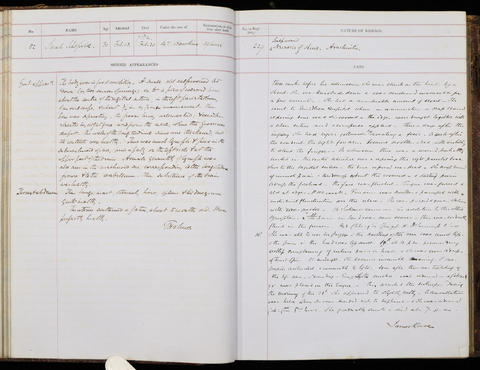 Occupation or role: Married woman
Age: 30
Gender: Female
Date of admission: 13 Feb 1861
Date of death: 20 Feb 1861
Disease (transcribed): Necrosis of skull. Arachinitis
Disease (standardised): Necrosis (Skull); Arachnoiditis (Brain)
Admitted under the care of: Hawkins, Caesar Henry
Medical examination performed by: Rouse, James
Post mortem examination performed by: Holmes, Timothy
Medical notes: Three weeks before admission she was struck on the head by a shovel. She was knocked down and was rendered unconscious for a few minutes. She lost a considerable amount of blood. She went to Middlesex Hospital when on examination a scalp wound exposing bone was discovered. Three days after the injury she had rigor followed by sweating and fever. A week after the accident the right fore arm became swollen and red, with inability to extend the fingers.
Body parts examined in the post mortem: Thorax and abdomen. The uterus contained a foetus, about 5 months old
Type of incident: Homicide/murder