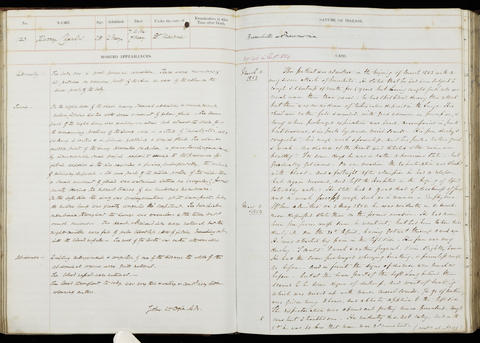 Occupation or role: [No occupation stated]
Gender: Male
Age: 28
Date of admission: 2 May 1854
Date of death: 7 May 1854
Disease (transcribed): Pneumonia. Bronchitis
Disease (standardised): Pneumonia (Lung); Bronchitis (Lung)
Admitting doctor: Nairne, Robert
Surgeon: Ogle, John William
Physician: Barclay, Andrew Whyte
Medical notes: 'This patient was admitted in the beginning of March 1853 with a very severe attack of bronchitis. He stated that he had been subject to cough & shortness of breath for 5 years, but having caught fresh cold was much worse then than usual; he had spit blood during this attack, but there was no evidence of tubercular deposit in the lungs’
Body parts examined in the post mortem: Thorax, abdomen