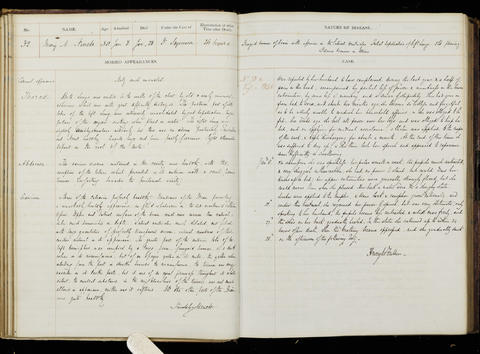 Admitted under the care of: Seymour, Edward James
Medical examination performed by: Hewett, Prescott Gardner
Post mortem examination performed by: Fuller, Henry William
Medical notes: 'Was reported by her husband to have complained during the last year & a half of pain in the head, accompanied by partial loss of power & numbness on the lower extremities, by some loss of memory and a sense of stupidity. This had gone on from bad to worse, and about two months ago, she became so listless and forgetful as to be utterly unable to conduct her household affairs, & she was obliged to be fed’
Body parts examined in the post mortem: Thorax, abdomen, cranium