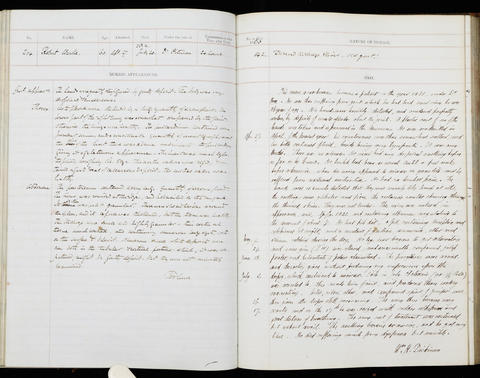 Occupation or role: [Occupation not stated]
Age: 60
Gender: Male
Date of admission: 27 Apr 1860
Date of death: 20 Jul 1860
Disease (transcribed): Diseased kidneys & liver. Old gout
Disease (standardised): Disease (Kidneys, liver); Gout (Joints)
Admitted under the care of: Pitman, Henry
Medical examination performed by: Dickinson, William Howship
Post mortem examination performed by: Holmes, Timothy
Medical notes: 'This man, a coachman, became a patient in the year 1851, under Dr Page [William Emanuel Page]. He was then suffering from gout, which he had had ever since he was 26 years of age. His hads were horribly distorted, and rendered perfectly useless […] A plaster cast of one of the hands was taken and is preserved in the museum’
Body parts examined in the post mortem: Thorax, abdomen