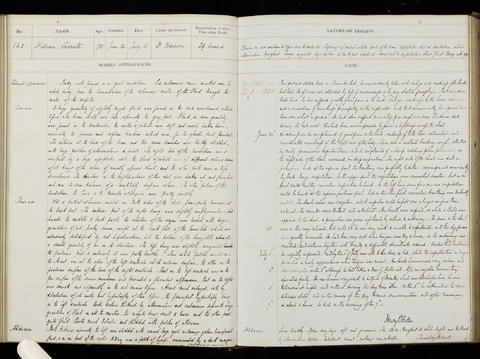 Occupation or role: [No occupation stated]
Age: 75
Gender: Male
Date of admission: 24 Jun 1845
Date of death: 6 Jul 1845
Disease (transcribed): Effusion in sub-arachnoid tissue & in the ventricles. Softening of central white parts of the brain. Apoplectic clot in cerebellum: arteries atheromatous throughout. Lungs congested, large portion at back part hepatized. Heart dilated & hypertrophied. Blood fluid. Kidneys with cysts
Disease (standardised): Effusion (Brain); Softening (Brain); Apoplexy (Brain); Plaque, atherosclerotic (Aorta); Disease (Lungs, heart); Cyst (Kidneys)
Admitted under the care of: Nairne, Robert
Medical examination performed by: Hewett, Prescott Gardner
Post mortem examination performed by: Fuller, Henry William
Medical notes: 'This patient stated that in November last, he was suddenly taken with vertigo and weakness of the limbs, but that the fit was not attended by loss of consciousness or by any absolute paraplegia. That ever since that time, he had suffered greatly from pain in the head, vertigo, weakness in the lower extremities and a sensation of numbness principally on the right side, and that occasionally his speech had been somewhat impeded’
Body parts examined in the post mortem: Cranium, thorax, abdomen