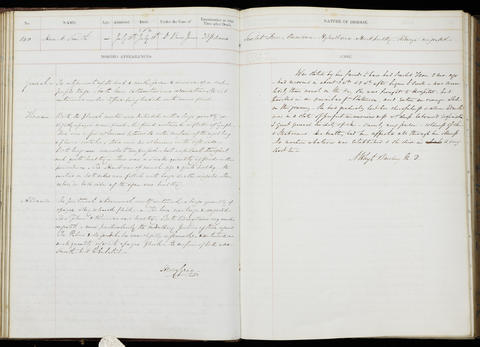 Occupation or role: [Occupation not stated]
Age: [Age not stated]
Gender: Female
Date of admission: 11 Jul 1849
Date of death: 11 Jul 1849
Disease (transcribed): Scarlet fever. Anasarca. Hydrothorax. Heart healthy. Kidneys congested
Disease (standardised): Scarlet fever (Systemic); Edema (Systemic); Hydrothorax (Lungs); Congestion (Kidneys)
Admitted under the care of: Bence Jones, Henry
Medical examination performed by: Barclay, Andrew Whyte
Post mortem examination performed by: Gray, Henry
Medical notes: 'Was stated by her friends to have had scarlet fever 2 months ago. Had recovered in about 3 weeks & 1 week after began to swell. Was more lively than normal on the day she was brought to hospital, had travelled in an omnibus from Battersea, and eaten an orage while on the journey. She had gradually lost her cheerfulness & when admitted was in a state of perfect unconsciousness’
Body parts examined in the post mortem: Thorax, abdomen