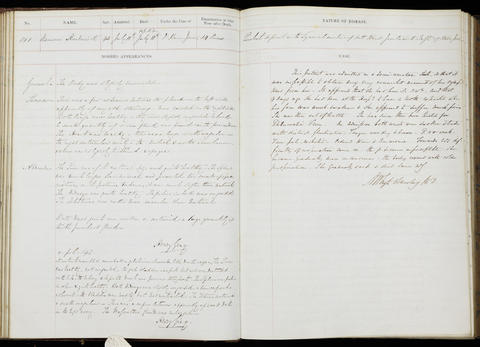 Occupation or role: [Occupation not stated]
Age: 45
Gender: Female
Date of admission: 11 Jul 1849
Date of death: 11 Jul 1849
Disease (transcribed): Purulent deposit in the synovial cavities of both wrist joints with inflammation of those joints
Disease (standardised): Deposit (Wrist); Inflammation (Wrist)
Admitted under the care of: Bence Jones, Henry
Medical examination performed by: Barclay, Andrew Whyte
Post mortem examination performed by: Gray, Henry
Medical notes: 'This patient was admitted in a semi-comatose state, so that it was impossible to obtain any very connected account of her symptoms from her. It appeared that she had been ill 3 weeks, and that 9 days ago she had been at the hospital to have a tooth extracted when her face was much swollen & she appeared to suffer much pain’
Body parts examined in the post mortem: Thorax, abdomen