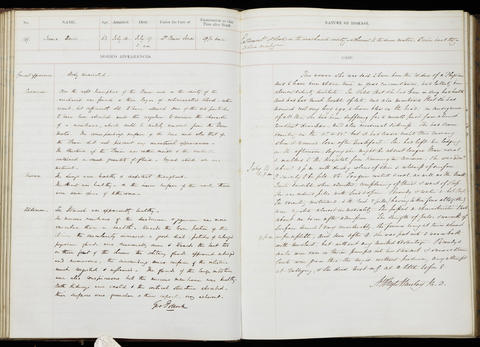 Occupation or role: Widow
Age: 63
Gender: Female
Date of admission: 16 Jul 1849
Date of death: 17 Jul 1849
Disease (transcribed): Extravasation of blood in the arachnoid cavity, adherent to the dura mater. Brain healthy. Cholera maligna
Disease (standardised): Extravasation (Brain); Cholera (Intestines)
Admitted under the care of: Bence Jones, Henry
Medical examination performed by: Barclay, Andrew Whyte
Post mortem examination performed by: Pollock, George
Medical notes: 'This woman who was to have been the widow of a physician and to have been at one time in good circumstances, had latterly been almost destitute. She stated that she had been in very bad health and had had much trouble of late, and also mentioned that she had received not very long ago, a severe blow on the head; in consequence of all this, she had been suffering for a month past from almost constant diarrhoea, and also occasional sickness’
Body parts examined in the post mortem: Cranium, thorax, abdomen