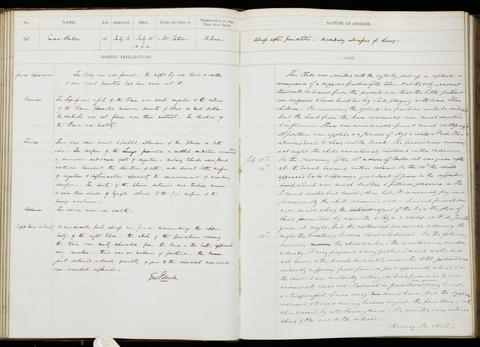 Occupation or role: [Occupation not stated]
Age: 4
Gender: Female
Date of admission: 11 Jul 1849
Date of death: 15 Jul 1849
Disease (transcribed): Abscess after periostitis. Secondary abscesses of lung
Disease (standardised): Abscess (Periosteum); Periostitis (Periosteum); Abscess (Lungs)
Admitted under the care of: Tatum, Thomas
Medical examination performed by: Holl, Harvey Buchanan
Post mortem examination performed by: Pollock, George
Medical notes: 'This child was admitted with the right leg put up in splints in consequence of a supposed fracture of the tibia, but the only account that could be learnt from the parents was the the little patient was supposed to have hurt his [sic] leg while playing with some other children. On removing the splints no fracture could be detected but the limb from the knee downwards was much swelled & inflamed. There was considerable fever & much restlessness’
Body parts examined in the post mortem: Cranium, thorax, abdomen, right lower extremity