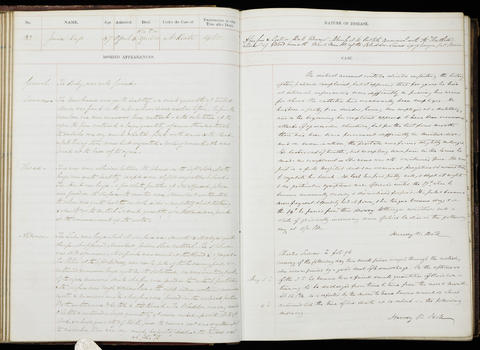 Occupation or role: Distillery worker
Age: 47
Gender: Male
Date of admission: 4 Apr 1849
Date of death: 20 Apr 1849
Disease (transcribed): Abscesses & cysts in both kidneys. Abscess of the prostate communicating with the urethra. Extravasation of blood beneath mucous membrane of the bladder. Serous apoplexy. Wet brain
Disease (standardised): Abscess (Kidneys); Cyst (Kidneys); Abscess (Prostate); Extravasation (Bladder); Apoplexy (Brain); Disease (Brain)
Admitted under the care of: Keate, Robert
Medical examination performed by: Holl, Harvey Buchanan
Post mortem examination performed by: Gray, Henry
Medical notes: 'No distinct account could be elicited respecting the history of this patient’s complaint, but it appeared that for years he had at intervals experienced some difficulty in passing his urine for which the catheter had occasionally been employed. He had been a pretty free drinker, having been employed at a distillery, and in the beginning his complaint appears to have been occasional attacks of spasmodic stricture, but for the last four months there had been some permanent difficulty in micturition’
Body parts examined in the post mortem: Cranium, thorax, abdomen