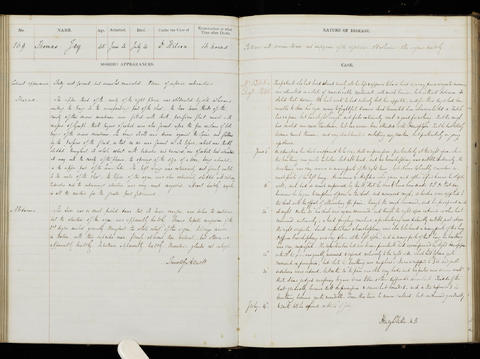 Admitted under the care of: Wilson, James Arthur
Medical examination performed by: Hewett, Prescott Gardner
Post mortem examination performed by: Fuller, Henry William
Medical notes: 'This patient, who had lived abroad nearly all his life & appears to have lived in a very free & irregular manner, was admitted in a state of considerable excitement, with much tremor, but without delirium. He stated that during the last week he had entirely lost his appetite, and for three days had been unable to close his eyes, owing to frightful dreams which tormented him whenever he did so’
Body parts examined in the post mortem: Thorax, abdomen