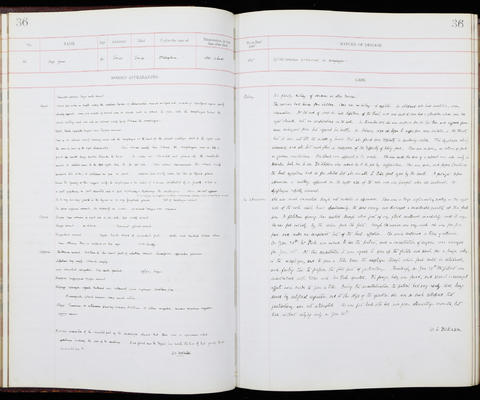 Occupation or role: [No occupation stated]
Age: 40
Gender: Female
Date of admission: 22 Jan 1891
Date of death: 30 Jan 1891
Disease (transcribed): Epitheliomatous stricture of oesophagus
Disease (standardised): Epithelioma (Oesophagus)
Admitted under the care of: Whipham, Thomas Tillyer
Medical examination performed by: Rolleston, Humphry Davy
Post mortem examination performed by: Dickinson, William Lee
Medical notes: 'No family history of cancerous or other disease. The woman had borne four children. There was no history of syphilis. In childhood she had scarlatina, never rheumatism. At the end of 1888 she had diphtheria of the throat, and was said to have had a glandular abscess over the right clavicle, but no complications in the neck […] In February 1890 she began to suffer from some irritation in the throat, but it was not till the middle of March that she found some difficulty in swallowing solids'
Body parts examined in the post mortem: Throat, thorax, abdomen