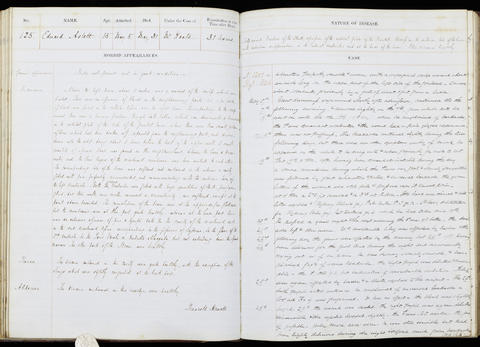 Occupation or role: [No occupation stated]
Age: 15
Gender: Male
Date of admission: 5 May 1846
Date of death: 31 May 1846
Disease (transcribed): Scalp wound. Fracture of the skull, depression of the orbital plate of the frontal. Abscess in the anterior lobe of the brain with extensive suppuration in the lateral ventricles and at the base of the brain. Other viscera healthy.
Disease (standardised): Wound (Head); Fracture (Skull); Abscess (Brain); Suppuration (Brain)
Admitted under the care of: Keate, Robert
Medical examination performed by: Gee, Adolphus John
Post mortem examination performed by: Hewett, Prescott Gardner
Medical notes: The patient was admitted with a superficial scalp wound caused about ten minutes previously by a fall of about six feet from a ladder.
Body parts examined in the post mortem: Cranium, thorax and abdomen
Type of incident: Trauma/accident