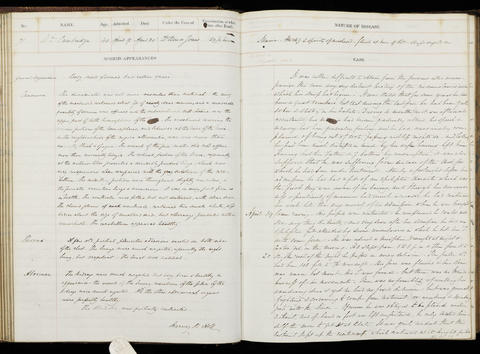 Occupation or role: [No occupation stated]
Age: 40
Gender: Male
Date of admission: 19 Apr 1850
Date of death: 24 Apr 1850
Disease (transcribed): Mania. Thickening and opacity of arachnoid. Fluid at base of brain. Slight congestion
Disease (standardised): Bipolar disorder (Brain); Disease (Brain)
Admitted under the care of: Bence Jones, Henry
Medical examination performed by: Barclay, Andrew Whyte
Post mortem examination performed by: Holl, Harvey Buchanan
Medical notes: It was difficult to obtain from the persons who accompanied this man any very distinct history of the circumstances under which his illness had begun. His speech and memory had been gradually failing and he had occasionally complained of being out of sorts.
Body parts examined in the post mortem: Cranium, thorax and abdomen
Type of incident: n/a