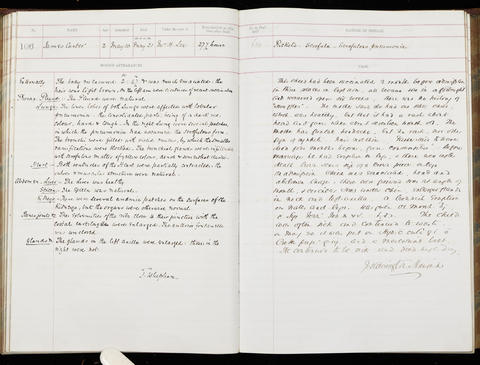 Occupation or role: [Occupation not stated]
Age: 2
Gender: Male
Date of admission: 10 May 1871
Date of death: 21 May 1871
Disease (transcribed): Rickets. Scrofula. Scrofulous pneumonia
Disease (standardised): Rickets (Bones); Tuberculosis (Lymph nodes); Pneumonia (Lungs)
Admitted under the care of: Lee, Henry
Medical examination performed by: Haward, John Warrington
Post mortem examination performed by: Whipham, Thomas Tillyer
Medical notes: 'This child had been vaccinated 2 months before admission in three places on left arm. All became sore in a fortnight and remained open six weeks. There was no history of ‘snuffles’. The mother said she had one other child, which was healthy, but that it had a rash about head and face when about seventeen months old. The mother had frontal headache, but no rash, nor other signs of syphilis. Hair not thin. Father said to have died four months before, from ‘consumption’. Before marriage he had eruption on legs’
Post mortem notes: Body parts examined in the post mortem: Thorax, abdomen, bones, joints, glands