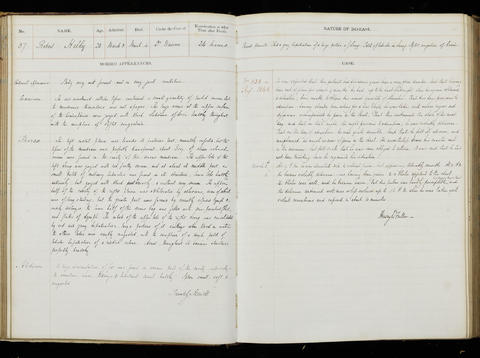 Admitted under the care of: Nairne, Robert
Medical examination performed by: Hewett, Prescott Gardner
Post mortem examination performed by: Fuller, Henry William
Medical notes: 'It was reported that this patient had for some years been a very free drinker, but that having been our of place for about 9 months, he had, up to the last fortnight when he again obtained a situation, been unable to obtain his usual quantity of stimulus […] the night previous to admission, he was violently delirious. That on the day of admission, he was quite sensible, said that he felt ill all over, and complained as much as ever of pain in the chest. He nevertheless drove his master out in the morning, but felt so ill that he was soon obliged to return. It was said that he had not been drinking since he regained his situation’
Body parts examined in the post mortem: Cranium, thorax, abdomen