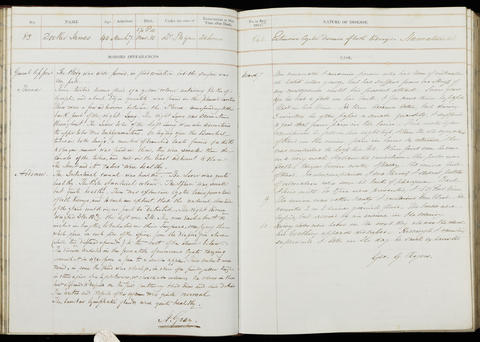 Occupation or role: [No occupation stated]
Age: 40
Gender: Male
Date of admission: 7 Mar 1855
Date of death: 10 Mar 1855
Disease (transcribed): Extensive cystic disease of both kidneys. Haematuria
Disease (standardised): Disease (Kidney); Haematuria (Urinary Tract)
Admitted under the care of: Page, William Emanuel
Medical examination performed by: Rogers, George Goddard
Post mortem examination performed by: Gray, Henry
Medical notes: Seven years before admission he had a fall on his back, and for some time he passed blood in his urine. He then became better but five weeks before admission he fell on his right hip and the symptoms of blood in his urine and pain in his loins returned.
Body parts examined in the post mortem: Thorax and abdomen
Type of incident: n/a