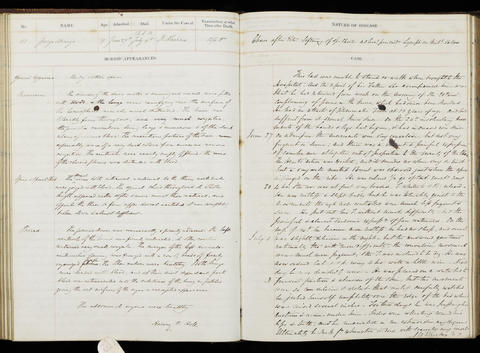 Occupation or role: [No occupation stated]
Age: 19
Gender: Male
Date of admission: 27 Jun 1850
Date of death: 4 Jul 1850
Disease (transcribed): Chorea after rheumatic softening of the spinal chord. Adherent pericardium. Lymph on mitral valves.
Disease (standardised): Chorea (Nervous system); Softening (Spinal cord); Disease (Heart)
Admitted under the care of: Nairne, Robert
Medical examination performed by: Barclay, Andrew Whyte
Post mortem examination performed by: Holl, Harvey Buchanan
Medical notes: This patient was unable to stand or walk when brought to the Hospital, and the report of his father who accompanied him was that he had returned from work on the morning of the 20th complaining of pains in the knees, which had since become swollen.
Body parts examined in the post mortem: Cranium, spine, spinal chord and thorax
Type of incident: n/a