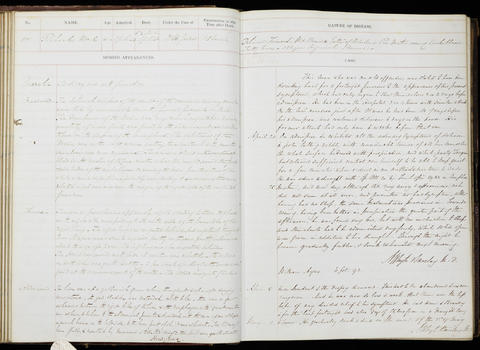 Occupation or role: [Occupation not stated]
Age: 41
Gender: Male
Date of admission: 24 Apr 1849
Date of death: 26 Apr 1849
Disease (transcribed): Delirium tremens. Wet brain & extravasation of blood in pia mater covering cerebellum. Fatty liver. Oblique inguinal hernia
Disease (standardised): Alcohol withdrawal delirium (Brain); Extravasation (Brain); Disease (Liver); Hernia (Abdomen)
Admitted under the care of: Bence Jones, Henry
Medical examination performed by: Barclay, Andrew Whyte
Post mortem examination performed by: Gray, Henry
Medical notes: 'This man, who was an old offender, was stated to have been drinking hard for a fortnight previous to the appearance of his present symptoms, which had only begun to shew themselves 3 or 4 days before admission. He had been in the hospital 3 or 4 times with similar attacks. On the last occasion just after Xmas he had been ill 7 days before his admission, and continued delirious 6 days in the house. His former attack had only been 6 weeks before that one’
Body parts examined in the post mortem: Cranium, thorax, abdomen