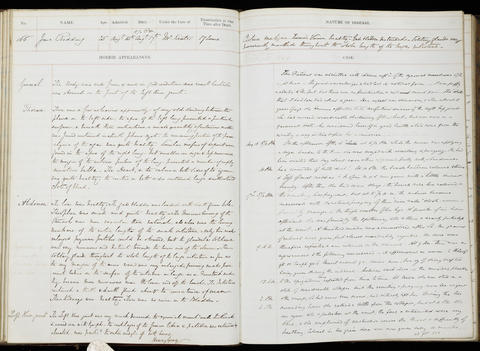 Occupation or role: [Occupation not stated]
Age: 25
Gender: Female
Date of admission: 15 Aug 1849
Date of death: 17 Aug 1849
Disease (transcribed): Cholera maligna. Thoracic viscera healthy. Gall bladder distended. Solitary glands very prominently marked throughout the whole length of the large intestine
Disease (standardised): Cholera (Intestines); Disease (Gallbladder, glands)
Admitted under the care of: Keate, Robert
Medical examination performed by: Holl, Harvey Buchanan
Post mortem examination performed by: Gray, Henry
Medical notes: 'This patient was admitted with chronic inflammation of the synovial membrane of the right knee. The joint was enlarged & had lost its natural form; it was puffy & elastic to the feel, but there was no fluctuation & not much pain. She stated that it had been bad about 4 years […] On the afternoon of the 16th at 6 1/2pm she was seized with vomiting & purging’
Body parts examined in the post mortem: Thorax, abdomen, left knee joint