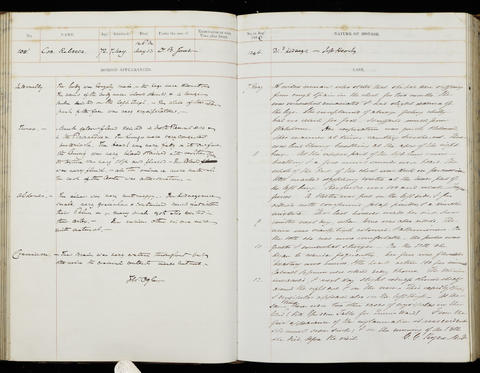 Occupation or role: [No occupation stated]
Age: 72
Gender: Female
Date of admission: 7 May 1856
Date of death: 13 May 1856
Disease (transcribed): Diseased Kidneys and Heart
Disease (standardised): Disease (Kidney); Disease (Heart)
Admitted under the care of: Bence Jones, Henry
Medical examination performed by: Rogers, George Goddard
Post mortem examination performed by: Ogle, John William
Medical notes: A widow woman who stated that she had been suffering from cough and pain in the chest for two months. She was somewhat emaciated and had slight oedema of the legs. She complained of always feeling chilly, had no relish for food and suffered much from flatulence.
Body parts examined in the post mortem: Thorax, abdomen and cranium
Type of incident: n/a