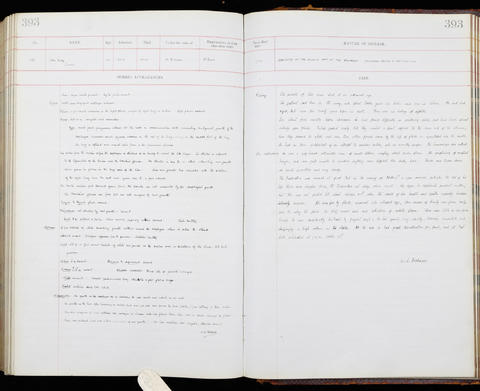 Occupation or role: Labourer
Age: 54
Gender: Male
Date of admission: 6 Oct 1891
Date of death: 29 Oct 1891
Disease (transcribed): Carcinoma of the middle part of the oesophagus. Gangrenous abscess in the right lung
Disease (standardised): Carcinoma (Oesophagus); Abscess (Lungs)
Admitted under the care of: Dickinson, William Howship
Medical examination performed by: Rolleston, Humphry Davy
Post mortem examination performed by: Dickinson, William Lee
Medical notes: 'The parents of this man died at an advanced age. The patient had been in the army, and spent twelve years in India and one in China. He had had ague, but none for twenty years before his death. There was no history of syphilis. For about five months before admission he had found difficulty in swallowing solids, and had lived almost entirely upon fluids'
Body parts examined in the post mortem: Thorax, abdomen