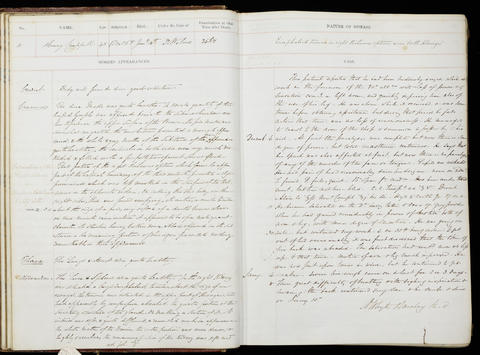 Occupation or role: [Occupation not stated]
Age: 48
Gender: Male
Date of admission: 6 Dec 1848
Date of death: 10 Jan 1849
Disease (transcribed): Encephaloid tumour in right thalamus opticus, & in both kidneys
Disease (standardised): Tumour (Brain, kidneys)
Admitted under the care of: Wilson, James Arthur
Medical examination performed by: Barclay, Andrew Whyte
Post mortem examination performed by: Gray, Henry
Medical notes: 'This patient reported that he had been suddenly seized while at work on the forenoon of the 30th ult with loss of power & of sensation coming in left arm, and quickly depriving him also of the use of his leg. He was alone while it occurred, & was some time before obtaining assistance but during that period he feels certain that there was no loss of consciousness. He managed to crawl to the door of the shop & summon a passer-by to his aid. At first the paralysis was complete but now there is some degree of power, but total anaesthenia continues. He says that his speech was also affected at first, but now there is no paralysis of any of the muscles of the face or tongue’
Body parts examined in the post mortem: Cranium, thorax, abdomen