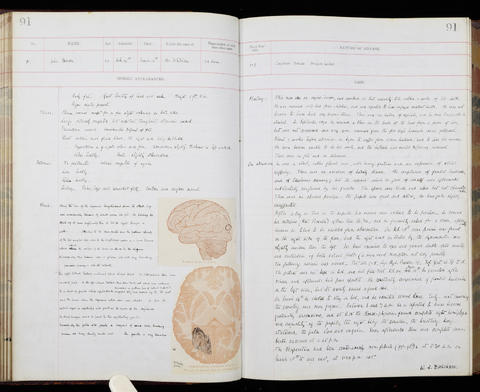 Occupation or role: Engine driver
Age: 40
Gender: Male
Date of admission: 25 Feb 1891
Date of death: 15 Mar 1891
Disease (transcribed): Cerebral tumour. Vascular glioma
Disease (standardised): Tumour (Brain); Glioma (Blood vessels)
Admitted under the care of: Whipham, Thomas Tillyer
Medical examination performed by: n/a
Post mortem examination performed by: Dickinson, William Lee
Medical notes: 'This man was an engine-drive, and worked in that capacity till within 7 weeks of his death. He was married and had four children, and was reported to have enjoyed excellent health. He was not known to have had any serious illness. There was no history of syphilis, and he was temperate in alcohol. In September 1890 he received a blow on the back of the head from a piece of iron, but was not concussed and very soon recovered from the few days' headache which followed. About 7 weeks before admission he began to suffer from severe headache, and to lose his memory. He soon became unable to do his work, and the headache and mental deficiency increased. There were no fits and no delusions'
Body parts examined in the post mortem: Thorax, abdomen, head
Illustrations: Yes
Type of incident: Trauma / accident / suicide