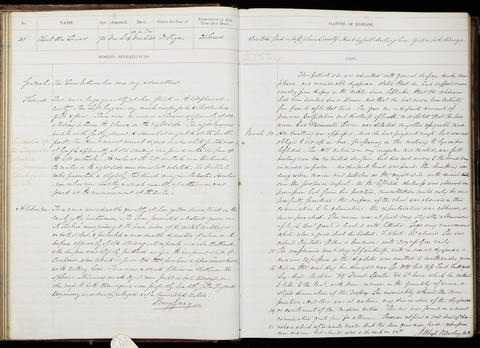 Occupation or role: [Occupation not stated]
Age: 75
Gender: Female
Date of admission: 14 Mar 1849
Date of death: 23 Mar 1849
Disease (transcribed): Ascites. Fluid in left pleural cavity. Heart hypertrophied. Nutmeg liver. Cysts in both kidneys
Disease (standardised): Ascites (Peritoneum); Disease (Lungs, heart, liver); Cyst (Kidneys)
Admitted under the care of: Page, William Emanuel
Medical examination performed by: Barclay, Andrew Whyte
Post mortem examination performed by: Gray, Henry
Medical notes: 'This patient who was admitted with general dropsy, dusky complexion and considerable dyspnoea, stated that she had suffered occasionally from dropsy in the ankles since September, that the abdomen had been swelled since Xmas, and that she had never been entirely free from it after that time. She gave an indefinite account of previous palpitation and shortness of breath, and stated that she had never had rheumatic fever, nor detailed any other assignable cause’
Body parts examined in the post mortem: Thorax, abdomen