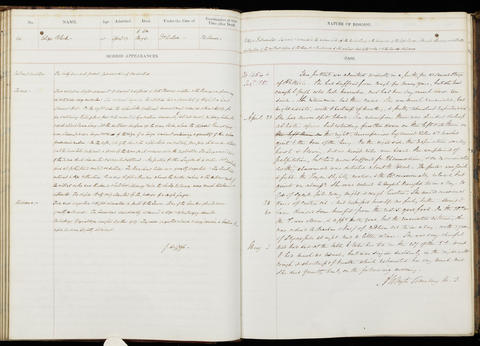 Occupation or role: [No occupation stated]
Age: 40
Gender: Female
Date of admission: 23 Apr 1851
Date of death: 4 May 1851
Disease (transcribed): Phthisis pulmonalis. Tubercle & vomicae in the upper lobe of the right lung & the lower one of the left lung. Recent pleurisy on both sides. Contraction of the mitral orifice of the heart & thickening of the anterior flap of the valve & of the chordae tendineae
Disease (standardised): Tuberculosis (Lungs); Suppuration (Lungs); Pleurisy (Lungs); Disease (Heart)
Admitted under the care of: Wilson, James Arthur
Medical examination performed by: Barclay, Andrew Whyte
Post mortem examination performed by: Ogle, John William
Medical notes: 'This patient was admitted evidently in a pretty far advanced stage of phthisis. She had suffered from cough for many years, but she had caught fresh cold last November, and had been very much worse ever since. The catamenia [menstruation] had then ceased. She was much emaciated, had night sweats, with shortness of breathing, & pretty abundant expectoration. She had never spit blood’
Body parts examined in the post mortem: Thorax, abdomen