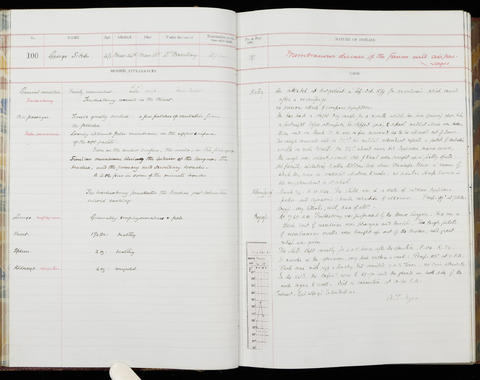 Occupation or role: [No occupation stated]
Age: 4 ½
Gender: Male
Date of admission: 24 Mar 1881
Date of death: 25 Mar 1881
Disease (transcribed): Membranous disease of the fauces & airpassages
Disease (standardised): Disease (Throat)
Admitted under the care of: Barclay, Andrew Whyte
Medical examination performed by: Owen, Herbert Isambard
Post mortem examination performed by: Myers, Arthur Thomas
Medical notes: 'He attended as out-patient in Sep-Oct 1879 for convulsions which ceased after a vermifuge. No previous attack of croupous symptoms. He has had a slight dry cough for a month which has been growing upon him. A fortnight before admission he stopped going to school. Medical advice was taken then and on March 21 he was so far recovered as to be allowed out of doors. The cough recurred and on 22nd his medical attendant reports a patch of exudation visible on each tonsil'
Body parts examined in the post mortem: Air passages, lungs, heart, spleen, kidneys