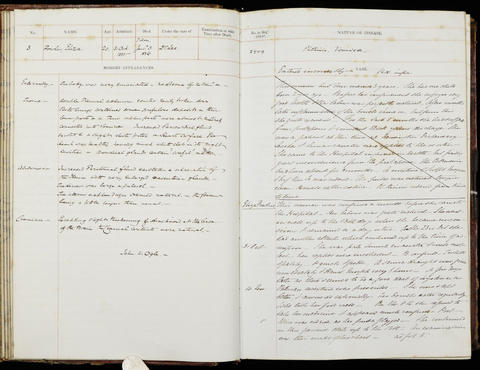 Occupation or role: [No occupation stated]
Age: 20
Gender: Female
Date of admission: 31 Oct 1855
Date of death: 3 Jan 1856
Disease (transcribed): Phthisis. Vomicae
Disease (standardised): Tuberculosis (Lungs)
Admitted under the care of: Lee, Henry
Medical examination performed by: Rogers, George Goddard
Post mortem examination performed by: Ogle, John William
Medical notes: This woman was confined a month before she came to the Hospital. She went on well up to the 13th day when she became unconscious and remained a day or so. On the 23rd October she had another attack which continued up to the time of admission.
Body parts examined in the post mortem: Thorax, abdomen and cranium
Type of incident: n/a