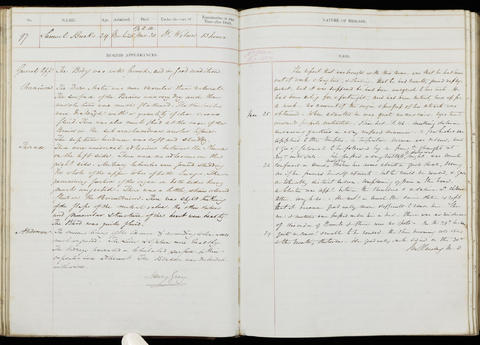 Occupation or role: [No occupation stated]
Gender: Male
Age: 24
Date of admission: 25 Mar 1854
Date of death: 30 Mar 1854
Disease (transcribed): Phthisis
Disease (standardised): Tuberculosis (Lung)
Admitting doctor: Wilson, James Arthur
Surgeon: Gray, Henry
Physician: Barclay, Andrew Whyte
Medical notes: 'The report that was brought in with this man, was that he had been out of work a long time, & starving, that he had recently found employment, and it was supposed he had been unequal to his task. He had been ailing for a fortnight, and had been entirely laid up for a week. No account of the origin & progress was obtained. When admitted he was quite unconscious’
Body parts examined in the post mortem: Cranium, thorax, abdomen