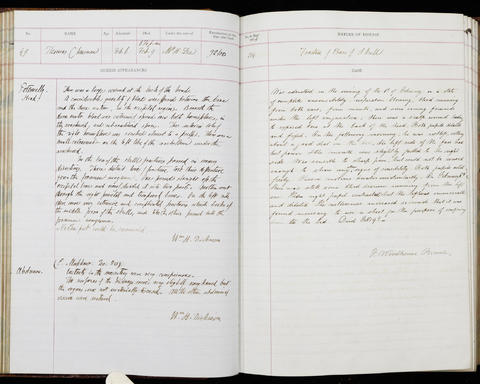 Occupation or role: Carman
Age: [No age stated]
Gender: Male
Date of admission: 6 Feb 1864
Date of death: 9 Feb 1864
Disease (transcribed): Fracture of base of skull
Disease (standardised): Fracture (Skull)
Admitted under the care of: Lee, Henry
Medical examination performed by: Dickinson, William Howship
Post mortem examination performed by: Braine, Francis Woodhouse
Medical notes: 'Was admitted in the evening of the 6th February in a state of complete insensibility, respiration blowing, blood running from both ears, from mouth, and some coming forwards under the left conjunctiva; there was a scalp wound leading to exposed bone at the back of the head’
Body parts examined in the post mortem: Head (‘no other part could be examined’)