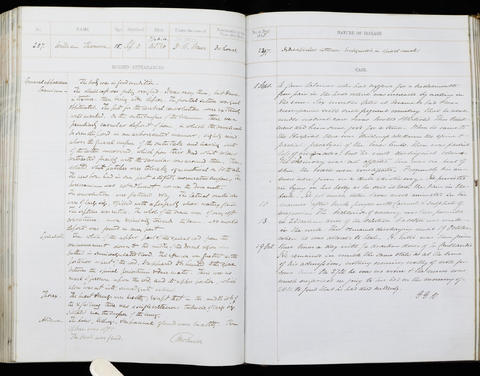 Occupation or role: Farm labourer
Age: 15
Gender: Male
Date of admission: 8 Sep 1858
Date of death: 28 Oct 1858
Disease (transcribed): Hydrocephalus interim. Ecchymosis in spinal canal
Disease (standardised): Hydrocephalus (Brain); Ecchymosis (Spine)
Admitted under the care of: Bence Jones, Henry and Ogle, John William
Medical examination performed by: Holmes, Timothy
Post mortem examination performed by: Rogers, George Goddard
Medical notes: 'A farm labourer who had suffered for a twelvemonth from pain in the head which was increased by working in the sun. Six months later it became so bad & was accompanied with such frequent vomiting that he went under medical care & was leeched & blistered. This treatment did him some good for a time. When he came to the hospital there was tenderness all down the spine & partial paralysis of the lower limbs’
Body parts examined in the post mortem: Cranium, spinal cord, thorax, abdomen