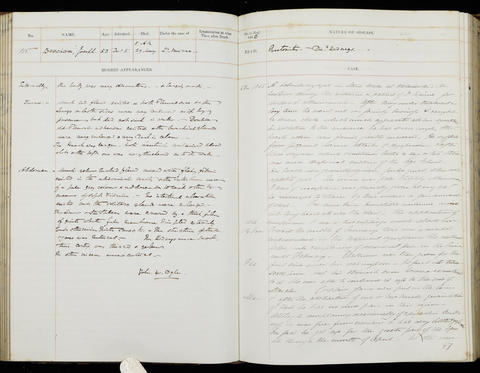 Occupation or role: Labourer
Age: 53
Gender: Male
Date of admission: 5 Dec 1855
Date of death: 29 May 1856
Disease (transcribed): Peritonitis. Diseased Kidneys
Disease (standardised): Peritonitis (Abdomen); Disease (Kidney)
Admitted under the care of: Nairne, Robert
Medical examination performed by: Rogers, George Goddard
Post mortem examination performed by: Ogle, John William
Medical notes: During the autumn he had been a patient of Dr Nairne for dropsy and albuminuria. After being under treatment a long time, he went out on family business and caught a severe chill which much aggravated all his symptoms. In addition to the anasarca he had a severe cough and the heart's action was found greatly increased.
Body parts examined in the post mortem: Thorax and abdomen
Type of incident: n/a