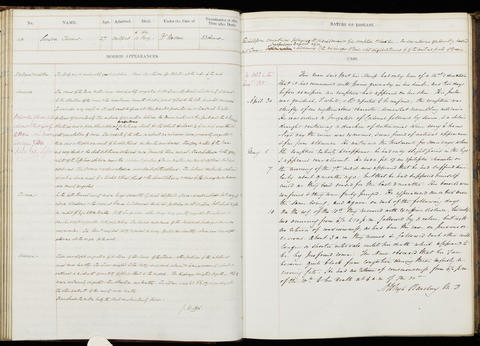 Occupation or role: [No occupation stated]
Age: 27
Gender: Male
Date of admission: 30 Apr 1851
Date of death: 12 May 1851
Disease (transcribed): Epileptiform convulsions following the disappearance of an eruption of the skin. The convulsions gradually passed into coma. Scrofulous deposit upon & thickening of the meninges of brain with slight softening of the central parts of brain
Disease (standardised): Epilepsy (Brain); Eruption (Skin); Coma (Systemic); Tuberculosis (Brain); Softening (Brain)
Admitted under the care of: Nairne, Robert
Medical examination performed by: Barclay, Andrew Whyte
Post mortem examination performed by: Ogle, John William
Medical notes: 'This man said that his illness had only been of a 14 nights’ duration, that it had commenced with pains generally in his limbs, and two days before admission an eruption had appeared on his skin’
Body parts examined in the post mortem: Cranium, thorax, abdomen

Preparation of dura mater, adherent to the surface of the brain, vide Museum Catalogue J.24 (Series XX, Subseries 4a, No 5)