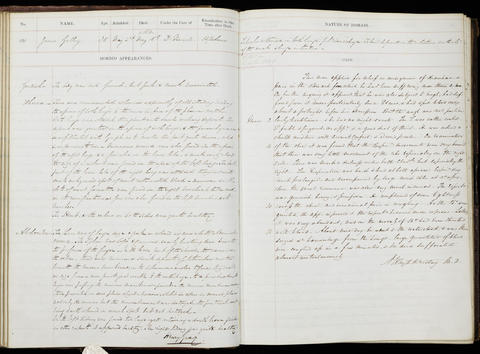 Occupation or role: [Occupation not stated]
Age: 38
Gender: Male
Date of admission: 2 May 1849
Date of death: 16 May 1849
Disease (transcribed): Tubercles & vomicae in both lungs. Pulmonary haemorrhage. Tubercular deposit in the intestines with ulceration of the small & large intestines
Disease (standardised): Tuberculosis (Lungs); Abscess (Lungs); Haemorrhage (Lungs); Tuberculosis (Intestines); Ulcer (Intestines)
Admitted under the care of: Nairne, Robert
Medical examination performed by: Barclay, Andrew Whyte
Post mortem examination performed by: Gray, Henry
Medical notes: This man applied for relief in consequence of diarrhoea, & pain in the stomach from which he had been suffering more than a month. On further enquiry it appeared that he was also subject to cough, had suffered from it more particularly since Xmas, & had spit blood only about a fortnight before his admission. But the cough was not particularly troublesome, & he had no night sweats’
Body parts examined in the post mortem: Thorax, abdomen