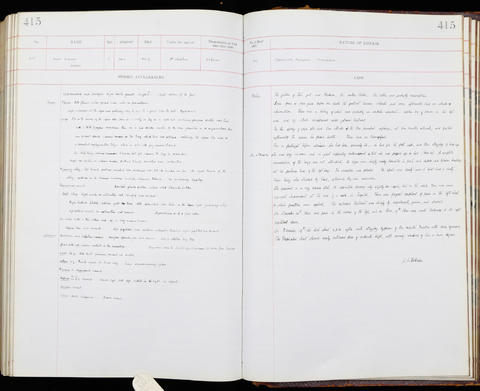 Occupation or role: Nursemaid
Age: 21
Gender: Female
Date of admission: 4 Nov 1891
Date of death: 19 Nov 1891
Disease (transcribed): Tubercular pneumonia. Thrombosis
Disease (standardised): Tuberculosis (Lungs); Pneumonia (Lungs); Thrombosis (Blood vessels)
Admitted under the care of: Whipham, Thomas Tillyer
Medical examination performed by: n/a
Post mortem examination performed by: Dickinson, William Lee
Medical notes: 'The father of this girl was Russian, the mother Scotch. The latter was probably consumptive. Some four or five years before her death the patient became chlorotic and soon afterwards had an attack of rheumatism. There was a history of what was probably an embolic accident, sudden loss of power in the left arm and leg which disappeared under galvanic treatment. In the spring of 1890 she had two attacks of the then prevalent influenza, at two months' interval, and failed afterwards to recover her former health. There was no haemoptysis'
Body parts examined in the post mortem: Thorax, abdomen